Home » Head and Brain Injuries » About the Brain

The brain is a soft, delicate, jelly-like organ that is the centre of the human nervous system and is responsible for all of the body’s functions. It weighs approximately 3lbs, or just under 1.5kg, and is enclosed within the skull, floating in a protective sea of cerebrospinal fluid. The fluid supports and nourishes the brain and acts as a sort of shock absorber.

Not only is the brain protected by the cerebrospinal fluid but also by three layers of membrane, known as the dura, pia and arachnoid, that lie between the brain and skull.

To function the brain has to have a regular blood supply from the heart, the brain is criss-crossed by a network of large arteries that divide into smaller branches.

The brain can be divided into four areas, known as “lobes”:

The different lobes are responsible for different functions and skills, injury to each causes different immediate and long term effects. 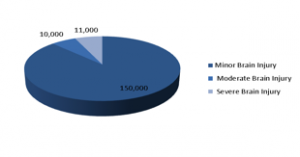 A head injury is classed as any trauma to the scalp, skull or brain.

There are three types of brain injury – closed, open and crush.

A closed head injury is the most common type of head injury.  This type of injury often occurs as a result of rapid acceleration or deceleration, for example when a car is hit from behind.  The head is then rocked backwards and forwards or rotated, the brain follows and this then can result in nerve fibres being twisted, stretched or even torn.

The front of the skull has sharp ridges, if the brain collides with these ridges more damage may be caused, arteries and veins running through the brain can be damaged, allowing blood to leak.

A crush type injury is the least common type of injury and involves the head being caught between two hard objects, such as the wheel of a car and the road.

Injury to the head/brain can be from a traumatic event or as a result of a neurological condition.

Our expert team is on hand to answer any questions you may have regarding our services. Please use the numbers below!

My medical negligence happened a few years ago – how long do I have to claim?

Making a legal claim can be a daunting experience, especially when the claim involves a clinical organisation or medica...